Scroll Down For Our Manifesto and Costing Document

For the last three and a half years, this country has felt trapped, like a lion in a cage. We have all shared the same frustration – like some super-green supercar blocked in the traffic. We can see the way ahead. We know where we want to go – and we know why we are stuck.

We have been paralysed by a broken Parliament that simply refuses to deliver Brexit. And that is why this election is so essential.

Get Brexit done - and we end the division and deadlock that have been so bad for our politics.

Get Brexit done - and we restore confidence and certainty to businesses and families.

Get Brexit done - and we will see a pent-up tidal wave of investment into our country.

Get Brexit done - and we can focus on the priorities of the British people, funding the NHS and tackling the cost of living.

Get Brexit done - and we can release that lion from its cage and take this amazing country forwards.

And as things stand, there is only one way to get Brexit done - and that is to return a Conservative Government with a working majority on December 12th.

I am very proud of the achievements of this Government in its first 100 days. We have mapped out a fantastic programme for the years ahead: to unite and level up, spreading opportunity across the whole United Kingdom.

The UK has extraordinary advantages. We lead the world in 21st-century technologies, from batteries to bioscience. We have many of the best universities on earth.There are parts of this country that are more productive and more innovative than anywhere else in Europe.

And yet there are parts of the country that feel left behind. Talent and genius are uniformly distributed throughout the country. Opportunity is not. Now is the time to close that gap – not just because it makes such obvious economic sense, but for the sake of simple social justice.

We Conservatives believe passionately that every child should have the same opportunity to express their talents and make the most of their lives – and that is why we are investing £14 billion over three years to increase funding for every primary and every secondary school pupil in the country.

I want everyone to have the fundamental security that comes from safe streets and safe neighbourhoods – so we are backing our police, putting 20,000 more officers on the streets, and giving them the powers to tackle crime with stop and search.

Everyone in the UK should have the peace of mind and confidence that come from world-class health care – and so this new One Nation Conservative Government is giving the NHS its biggest ever cash boost, with 20 hospital upgrades and 40 new hospitals, while delivering 50,000 more nurses and 6,000 more doctors and creating an extra 50 million general practice appointments a year.

If this Conservative Government is returned to office, we will have an infrastructure revolution for this country. Now is the time to invest in Northern Powerhouse Rail, and the Midlands Rail Hub, and so many more projects, as well as a massive programme of improvements for our roads and gigabit broadband for every home and business.

We will invest in technology and innovation. And we will invest in Britain’s people by giving them the tools and training to flourish in the economy of the 21st century.

And there is only one way to pay for world-class health care and outstanding infrastructure – and that is to foster and encourage the millions of British businesses, large and small, that create the wealth of the nation. Their success is our success. It is thanks to the innovations of British batterymakers and turbine designers that we are able to cut CO2 - and achieve our goal of being carbon neutral by 2050.

It is precisely because we understand the concept of aspiration, and enterprise, that the UK is now leading a new green industrial revolution.

The tragedy of the modern Labour Party under Jeremy Corbyn is that they detest the profit motive so viscerally – and would raise taxes so wantonly – that they would destroy the very basis of this country’s prosperity.

If you want to understand the impact of a Corbyn Government on ordinary people, remember that he has voted against tax cuts worth £7,800 for people on modest incomes. He is already committed to putting up corporation tax to one of the highest levels in Europe.

And what will he do for an encore? Embark on a spending and borrowing spree that would cost every taxpayer £2,400 a year, as well as confiscating 10 per cent of the value of our most prominent businesses and putting those assets in the hands of John McDonnell. What madness.

We will run an ever stronger and more dynamic economy.

We will defend and protect our United Kingdom - the awesome foursome that make up the most successful political partnership in history.

We are proud of our Armed Forces, and will always fund them properly.

Jeremy Corbyn is prepared to break up the UK, to disband the Armed Forces, and even when it comes to cold-blooded murder on British soil, he cannot stand up for our country and do what is right.

We will stand up for our country and our values around the world.

Above all, we Conservatives will respect the democratic will of the people. After three and a half years of procrastination, we have a great new deal that is ready to go - so that we will be finally out of the EU by January 31.

We are able to deliver all the advantages of leaving the EU: making our own laws, controlling our own borders, taking back our money, and exercising all kinds of new freedoms.

From freeports to free trade deals, from abolishing the cruel live shipment of animals to cutting VAT on tampons, we in the UK will be able to remain close to our European friends and partners; but where we choose, we will be able to do things differently and better.

With a new Parliament and a sensible majority Government, we can get that deal through in days. It is oven-ready - and every single Conservative candidate at this election, all 635 of them, have pledged to vote for this deal as soon as Parliament returns.

And what is Jeremy Corbyn’s alternative? A new negotiation, and then a new referendum - and he still cannot tell us what side he would be on: in or out, Remain or Leave.

It is a recipe for chaos - compounded by a second referendum on Scotland. This country has had enough of dither and delay, of defeatism and despair.

We don’t want to waste 2020 on two acrimonious referendums. We want next year to be a year of hope, of prosperity and growth.

We want to move on, with our programme of investment in education, infrastructure and technology, to create a high-wage, high-skill, low-tax economy.

We want to get Brexit done so that we can get on with our work of making Britain the greatest place in the world to live, to go to school, to start a family, to own a home, to start a business – with the most ambitious environmental programme of any country on earth.

Let’s get Brexit done, and take this country forward. 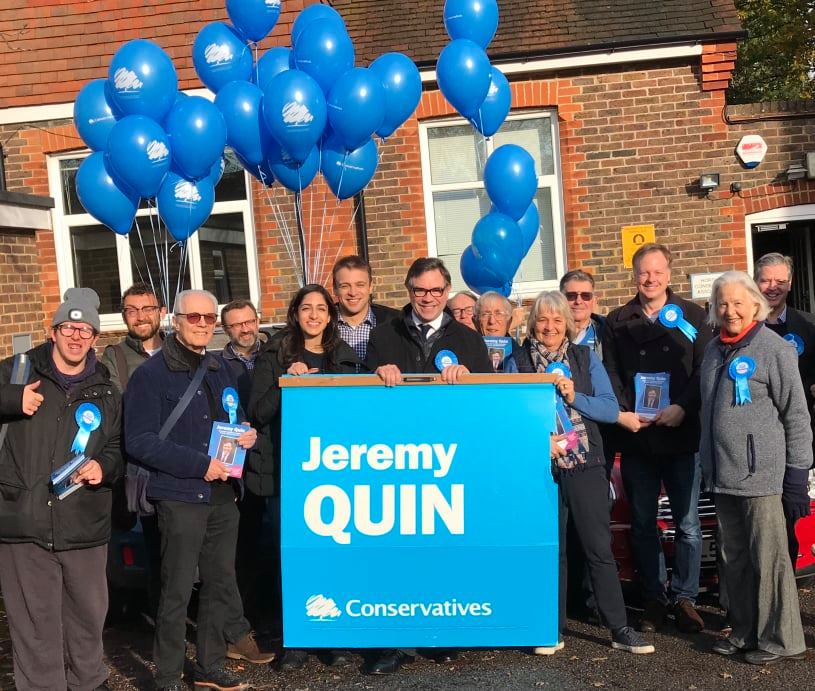 Jeremy and some of our supporters at the launch of our campaign to have Jeremy returned as Member of Parliament for Horsham.

Read about how we're Strengthening the NHS

Read about how we're Investing in Schools

Read about how we're maintaining A Strong Economy