Selected as the Conservative candidate for the 2008 London mayoral election, Johnson defeated Labour incumbent Ken Livingstone and resigned from the British House of Commons. During his first term as Mayor of London, he banned alcohol consumption on much of the capital's public transport, and introduced the New Routemaster buses, cycle hire scheme, and Thames cable car.

In 2012, he was re-elected, again defeating Livingstone. During his second term, he oversaw the 2012 Olympics.

In 2015, he was elected MP for Uxbridge and South Ruislip, stepping down as Mayor the following year.

In 2016, Johnson became a prominent figure in the successful Vote Leave campaign for Brexit as part of the United Kingdom's withdrawal from the European Union. He was subsequently appointed Secretary of State for Foreign and Commonwealth Affairs by Theresa May, but resigned in criticism of May's approach to Brexit and the Chequers Agreement two years later.

In 2019, he was elected Conservative Leader and appointed Prime Minister by Her Majesty the Queen.

On 12 December 2019, Boris Johnson led the Party to a landslide victory securing a majority of 80 seats - the largest Conservative majority since 1987. 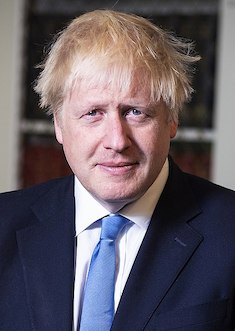 Leader of the Conservative and Unionist Party

Prime Minister of the United Kingdom

Further information about the Prime Minister can be found here.