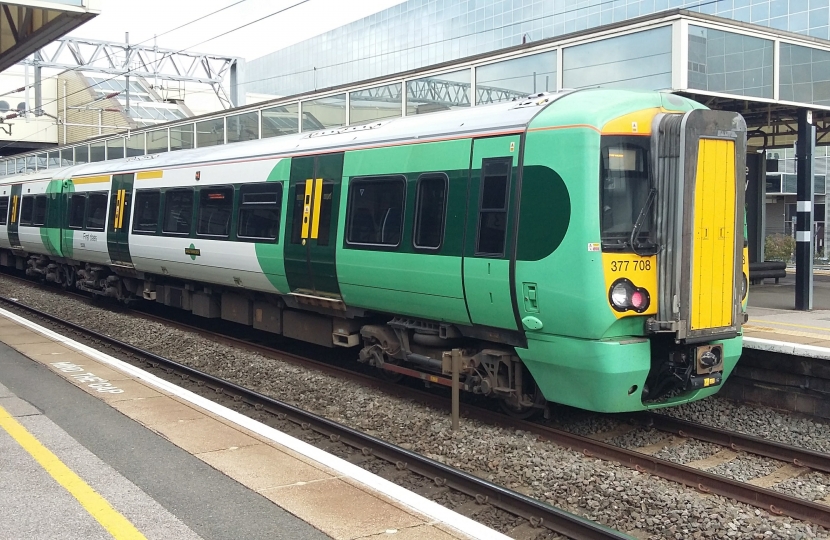 Our local MP, Jeremy Quin has campaigned continuously since he was first elected in 2015 for a better local rail service for people in and around Horsham and the wider constituency. Many issues remain but it is nonetheless important to recognise real improvements to the service – and these are happening.

Punctuality is improving. Two thirds of services are now reaching every single station on the route within 59 seconds of timetable, up from half six months ago. On average, 80% of Horsham services into London have arrived at their final destination within 5 minutes over the last six months to July 2019. That’s not high enough – but it is nearly sixteen percentage points higher than the comparable figure for the six months to January 2019.

There are currently 30 through-London rail services, a “new” service running from Horsham to Peterborough every weekday with 5 trains in the peak periods. GTR plan to extend these through services to Saturdays as part of this December’s timetable improvement. The through-London trains have arrived at their final destination within 5 minutes over the last six months on average 82% of the time - six percentage points higher than the average from July 2018 to January 2019 and Thameslink has also boosted on-time performance, up nearly 9 percentage points to 66%.

It was painful getting there but the promise that London Bridge’s transformation, new rolling stock, the additional £350m investment on the lines and the through trains would improve resilience and reliability is coming through.

Performance is improving and needs to continue to improve. We are all too aware of the costs of commuting or even occasionally using the railways. Given the costs it is all the more important that we hold the providers of our rail service to account. This summer, Jeremy has been handing out copies of a rail survey he is conducting on our local rail service. It can also be found here and we would be grateful if as many constituents as possible could participate. Continuing the pressure on the Operators is vital – as will be ongoing investment in the service – but we start from a better base than one or two years ago.

Your questions answered by Matt Hancock, Secretary of State for Health and Social Care