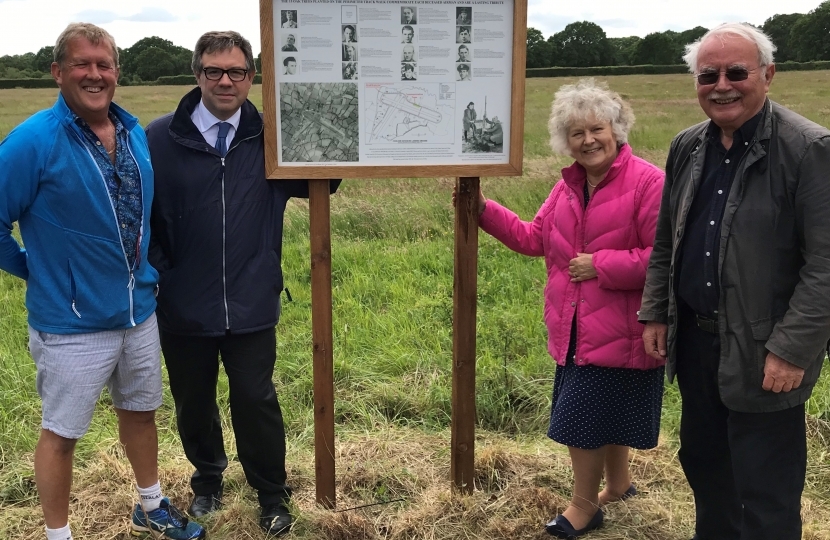 Last week marked the 75th anniversary of the D-Day landings. I know many enjoyed watching the ceremony held on Shoreham Common as well as the moving ceremonies in France. I also know many would have taken a moment for quiet reflection to remember those who did not return from Normandy and also the many civilians who died in this crucial battle for the liberation of Western Europe.

On Saturday, it was a pleasure to learn more about the role Coolham played in supporting the Normandy Campaign by visiting the airfield commemorative walk and the memorial outside the Selsey Arms.

The airfield was used between 1st April 1944 and 12th January 1945, its primary purpose being to support the D-Day landings and the campaign beyond.

During this period, 174 pilots were stationed at Coolham. 15 pilots and ground crew died carrying out their duties. Coolham airfield epitomises the international war time effort to liberate Europe - with Polish, British and Canadian pilots all flying from the base.

Eight Polish pilots and ground crew based at Coolham, lost their lives during the War:  I was present to see their bravery recalled with a wreath laid in their memory by a representative of the local Polish community.  Poles did so much, so far from home, to assist in our country’s defence.  In recent years more Poles have come to live in the UK, making again a hugely valuable contribution to our communities.

Remembering the role Horsham played during this historic battle is absolutely right as we renew our commitment to ensure that these horrors are never repeated.

Photo caption: Jeremy Quin with Gordon Lindsay and Kate Rowbottom of Horsham District Council and Richard Harries of Shipley Men’s Shed at the unveiling of the new plaque commemorating the role of Coolham Airfield.