Served in the Women’s Royal Naval Service (now part of the Royal Navy) from leaving school until 1982. This included working in communications at a large naval air station, Culdrose in Cornwall. Then worked at NATO Headquarters in London. Subsequently was in Hong Kong as Assistant Naval Intelligence Officer.

Married Peter, a serving naval pilot, and then worked for various government ministers in the Ministry of Defence.

Moved to Horsham in 1992 and became a teaching assistant at Holbrook School for fifteen years, in addition to being a school governor and a member of North Horsham Parish Council.

Elected as a district councillor in 2015, Karen is Chairman of the Planning Committee (North).

Particularly active in preserving the local infrastructure especially with the forthcoming new development in North Horsham; a move which she strongly opposed.

Married with two grown up sons, has a variety of interests including watercolour painting, and jam making

The current Branch has been going for about five years We have hosted a succession of very successful wine and cheese parties. In the summer of 2019, we held a Garden Party on 20 July hosted by Eileen and Ray Lawes. 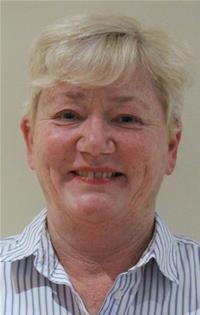