He is actively engaged in the constituency at every level.  In Westminster he is particularly focused on issues impacting the constituency. He helped convene debates on Southern Rail and on "Fair Funding" in education: drawing on close contact with local schools and personal experience prior to his election as a school governor.

He is a keen supporter of airport expansion at Heathrow rather than Gatwick.  He believes that expansion at Heathrow is in the national interest - and prevents having  to  mitigate  the huge strain on local infrastructure that the construction of a new runway at Gatwick would create.  While Jeremy supports the jobs and economic benefit that Gatwick brings to our area he continues to represent constituents on issues such as aircraft noise.

Jeremy was selected by the Parliamentary Conservative Party to serve on the Work and Pensions Select Committee. Financial Inclusion is an issue close to his heart; he is a former director of a credit union - providing alternative means of accessing banking services and an ethical alternative to "doorstep lending".  Prior to his election in 2015, he was also a regular volunteer in a homeless shelter.  From January 2016 through to his appointment to the Government in 2018, Jeremy served as a member of the Financial Inclusion Commission a cross-party body which works to improve financial inclusion and as the Chairman of the All Party Parliamentary Group on Credit Unions.

He also takes a close interest in Economic issues.  This follows a professional career as a Company Adviser:  on leaving University he joined NatWest Securities (which later became part of Deutsche Bank) becoming a Managing Director of his firm in 2001. In 2008-2009 he joined HM Treasury on secondment serving as their Senior Corporate Finance Adviser through the financial crisis.

He was born in Aylesbury and is married to Joanna.  They both knew the constituency well before Jeremy was first selected and have enjoyed making their home in Horsham.

The son of a primary school teacher and agricultural merchant (later ordained as a Church of England Vicar) Jeremy attended St Albans School before reading History at Oxford.

Jeremy was appointed by the DWP Select Committee to the joint committee investigating the events surrounding the collapse of BHS.  The subsequent report helped deliver a better result for BHS pensioners and prompt the demands for changes to private company governance to protect employees and pensioners.

Jeremy campaigned to "Remain" in the EU Referendum but pledged to honour and implement the decision made by the British people. He accordingly consistently supported attempts to secure BREXIT by means of an agreed withdrawal deal between the U.K. and EU.

Having served as a Parliamentary Private  Secretary in DEXEU.  Jeremy accepted a role in the Government as a member of the Whips Office in July 2018 and was promoted to be a senior Whip (a Lord Commissioner) in November 2018.  The Whips' Office manage parliamentary business and act as a conduit between the Government and Members of Parliament.  On forming his new administration in July 2019 the Prime Minister recommended Jeremy to serve as "Comptroller of Her Majesty's Household" (a post in the Royal Household dating back to the 14th century). The post is now a senior role in the Whips Office.  As Comptroller, Jeremy also had specific duties on various Royal occasions, such as the State Opening of Parliament.

In December 2019, the Prime Minister promoted Jeremy to be Parliamentary Secretary in the Cabinet Office.  At the subsequent Ministerial Reshuffle in February 2020 Jeremy took on the role of Minister of State in the MOD with specific responsibility for Defence Procurement.

The Minister for Defence Procurement is responsible for the Defence Equipment Plan, relations with defence industry and exports, science and technology.

During the Covid-19 pandemic, Jeremy and the MOD have been providing a range of support to the civil agencies in connection with distribution, patient rescue and PPE amongst others.

The British Army’s first photovoltaic Solar Farm has been officially opened by the Minister for Defence Procurement, Jeremy Quin, today.

Steel was today cut for HMS Venturer, the first vessel of the Royal Navy’s Type 31 frigates that will be at the centre of its surface fleet.

The UK's Chinook helicopters will be enhanced with state-of-the-art defensive systems, while the RAF's C-17 Globemaster fleet will receive a software and hardware upgrade.

Space Command will protect UK interests and capabilities in Space.

The Local Plan for Horsham District

This is a copy of an article Jeremy wrote for the West Sussex County Times on Thursday 22 July 2021.

Defence Minister Jeremy Quin at GKN Aerospace on the Isle of Wight.

The Royal Navy’s Type 45 destroyers will receive a £500 million upgrade to enhance their firepower capability.

The main annual fundraiser of the calendar, the Association Annual Dinner will take place on Thursday 7 July 2022. Obviously, our Member of Parliament, Jeremy Quin will be in attendance as will our President, Michael Prideaux.

It will be held at Mannings Heath Golf and Wine Estate. 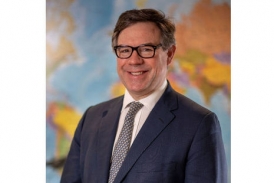